The United States Department of Agriculture is set to purchase an unknown quantity of submachine guns, leading to questions about where the weapons will be heading and for what purpose they will be used.


â€œThe U.S. Department of Agriculture, Office of Inspector General, located in Washington, DC, pursuant to the authority of FAR Part 13, has a requirement for the commerical (sic) acquisition of submachine guns, .40 Cal. S&W, ambidextrous safety, semi-automatic or 2 shot burts (sic) trigger group, Tritium night sights for front and rear, rails for attachment of flashlight (front under fore grip) and scope (top rear), stock-collapsilbe (sic) or folding, magazine â€“ 30 rd. capacity, sling, light weight, and oversized trigger guard for gloved operation.â€
View attachment 814
Hopefully, those operating the semi-automatic weapons will be better skilled than whoever is writing solicitations on behalf of the USDA, but the fact that the law enforcement division of the United States Forest Service, which operates under the USDA, is not mentioned in the request has prompted some to question where the guns will be going.

â€œThey will no doubt attempt to justify their purchase of military hardware by explaining that they conduct criminal investigations and may need to do armed raids,â€ writes Bob Owens, adding, â€œThis is part of a trend to arm every branch of federal government, whether the individual agency has a legitimate need for a paramilitary force or not.â€

Concerns over large ammunition purchases by the Department of Homeland Security have raged over the past two years, although a recent Government Accountability Office investigation downplayed the issue as nothing out of the ordinary.

More pertinent than the amount of bullets purchased has been the type of ammunition and the DHSâ€™ insistence that companies be able to supply them quickly if needed, which some have linked to the federal agencyâ€™s preparations for domestic unrest in the United States.

In May last year, the DHS sent out a request for information asking companies if they could provide 2 million bullets within a 30-60 day turnaround period.

In October 2013, the DHS acknowledged it was hiring armed guards to secure government buildings in the event of â€œpublic demonstration(s)â€ and â€œcivil disturbances,â€ while also spending half a million dollars on fully automatic pepper spray launchers and projectiles that are designed to be used during riot control situations.

In February last year, Law Enforcement Targets Inc., a contractor that had previously done $2 million dollars worth of business with the DHS, was forced to apologize after producing â€œno more hesitationâ€ shooting targets which depicted pregnant women, children, and elderly gun owners in residential settings as â€œnon-traditional threats.â€

This shit is getting crazier and crazier by the day. The more I read about events such as these, the more I truly believe that obama is NOT planning to leave the Whitehouse in 2016, election be damned. It seems to me the govt. is ramping up all branches into military style assault units. The USDA, needs next-gen, special-ops type, semi-auto assault rifles for exactly.......what?????
I think the anti-Christ is going to try to usurp power,........become king of America. I see no other reason to arm every single federal branch.

Hmmm, I think you have some very good observations there Diesel. If you follow the writings of Nostradamus he stated that the west would fall into a great war with the east and the third anti-christ. Buckle up this is going to be a very bumpy ride my friends. The government KNOWS that the crash of the American dollar is imminent. My belief is they are arming as many government agencies as possible in hopes that those people will defend their employer and be saved the burden the common folk endure. My only hope is that the U.S. Military personnel will not follow this man we loosely call president and defend the people of the country instead.

HE THIRD AND FINAL ANTICHRISTâ€¦ MABUS

The Candidates for Mabus.
​
The prophet forged visions into cryptic verse after sitting alone in a state of trance in nightly vigils locked away in his secret upstairs study in Salon Provence summoning what he called â€œangelic emissaries from Godâ€ to his aid. In the mid-1550s, he received from them words, sounds and twilit images warning about a third and final antichrist that has yet to fully reveal himself. This man is described in a prophecy indexed 10 Q72 (Century 10, Quatrain 72) as, The king of terror. He will enter the world stage, descending from distant future skies, In the year 1999 September month.Nostradamus fashioned anagrams out of numbers too. If the month of â€œSeptemberâ€ is a lead, then â€œ1999″ could be a reverse code for the actual year, month and DAY:1999 = 9111

Thus the prophecy means to say:

In the year 9.11.1 September month,
The great King of Terror comes from the Sky.​
Nostradamus gave the Third Antichrist the following code name. Heâ€™s Mabus. A number of notorious contemporary figures, still living or recently dead from the Middle East can see their names spelled in the Mabus code. But there also are other leaders from the West, deeply entangled in Middle Eastern turmoil, a current US president and a charismatic candidate who could be his successor whose names also easily decode out of Mabus, making the search for the right candidate the most provocative and topical challenge presented by Nostradamus for our present times.Though his true name is occulted, the Third Antichristâ€™s destiny is made clear. Unlike the first two, he is the first to die in a war he initiates at the sign of a comet, or a rocket falling out of the skies:World War III begins when Mabus dies a sudden death. 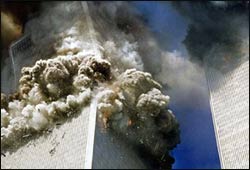 911: World Trade Center.
​
His act of terror unites a hundred nations in a war against what Nostradamus calls three Eastern kings secretly allied in opposition to the West. They would use piracy (hijacking?), ambush and subterfugeto wage war.Know the war has begun when hollow mountains of a great New City (yet to be built in Nostradamusâ€™ day) at latitude 45 in an unborn country he called Americh or Amorica, will be attacked by a fire in the sky. The hollow mountains crafted by man will be seized and plunged into the boiling cauldron of their own debris clouds.After this happens, we will be living in the days
of the last Antichrist.

What the *uck do they need all that shit for? Zombie cows and shit? Give me a fucking break.
You must log in or register to reply here.
Forum software by XenForo™ © 2010-2018 XenForo Ltd.